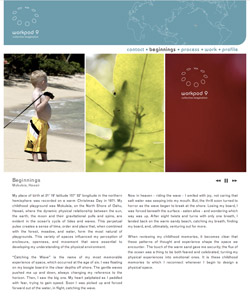 Last Friday marked the launch of a website redesign for Workpod 9, an architecture and design firm based in Austin, Texas. I worked on the project as web developer, as well as design helper to Ryan Coover, principal of Workpod 9, who designed most of the site.

The original Workpod 9 website was actually one of my first freelance projects, back in 2004. That site was all Flash (to date, my only all-Flash project, as a matter of fact), and as a result, it was pretty, but not search engine friendly. One of the primary goals of this redesign was to keep the feel of the old site, but ditch the Flash.

To replace the Flash-based "film strips", the series of scrolling images on many of the site's pages, I wrote a custom film strip class in Javascript, on top of the Prototype framework. In addition to how the old site's film strips worked, I've now added start/stop controls, as well as previous/next jump buttons. Take a look for yourself.