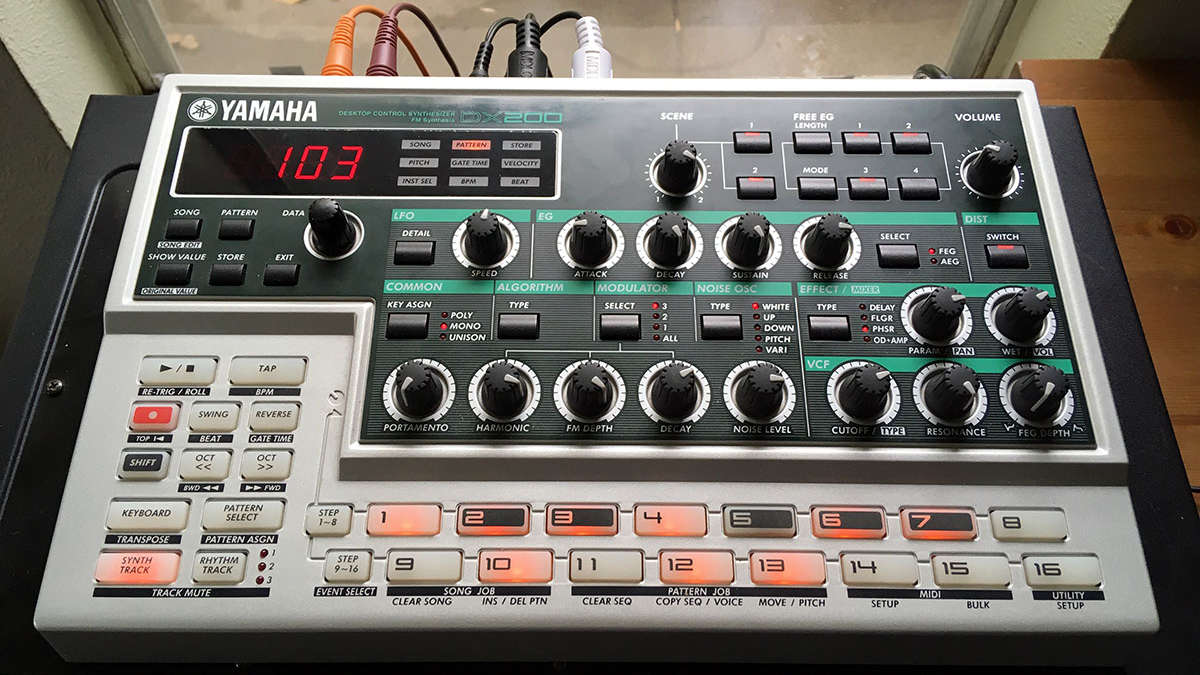 Before the Digitone, there was the DX200

About a year ago, the venerable Elektron released their Digitone: an FM synth box with a sequencer, promising to make the elusive methods of frequency modulation into a more hands-on experience. Well, 17 years earlier, Yamaha tried a similar thing: the DX200. And about a month ago, a kind and generous man named Calvin met with me on a chilly night in the parking lot of a Walgreen's Pharmacy in Austin to loan me his DX200 (pictured here). And so, today, I bring you Patch Base 3.4 and the Yamaha DX200 Editor and Librarian. Let me tell you a bit about the new editor, and the DX200 itself.

So, what is the DX200? For starters, it's a Yamaha DX7 in a small box. The voice architecture is identical to the DX7, and it can even read DX7 patches. It has 16-voice polyphony. You can ignore the sequencer and the effects and everything and just play this box like a DX7 (with an external keyboard, that is). But, you can't really edit the voice using the box itself. There are knobs for Algorithm, LFO speed, and some tweaks to a few of the operators, but that's it.

If you want to create your own voices with all the power of the DX7, Patch Base has you covered. The layout for the voice editor is the same as for the DX7. Visualize each algorithm, all 6 of the envelopes, and control every parameter. The "Synth" button in the top left accesses a folder for importing your own DX7 patches and banks, making it easy to swap out the voice on a pattern (something you can't do on the DX200 itself!). 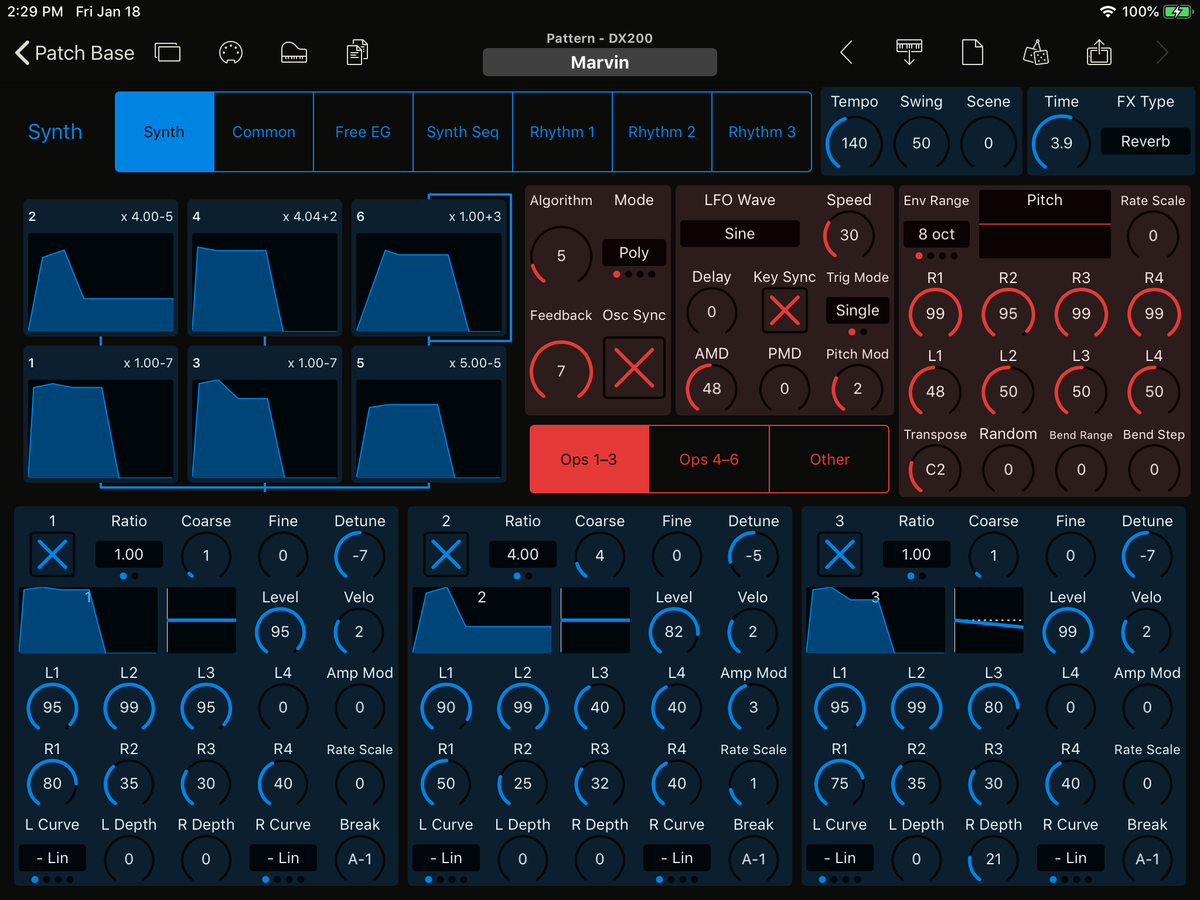 Beyond the DX7, the DX200 has a filter with its own envelope, distortion, EQ, noise generator, and stereo effects (Delay, Reverb, Flanger, Phaser). The filter can be low-pass, high-pass, band-pass, you name it. The distortion and noise generator let your voices take on a new personality. And the EQ can fine-tune the sound. The effects section can be applied to the synth and the rhythm tracks, too. The reverb gives a nice sense of space to everything. And the delay can add rhythmic complexity (triplets!) to a 16-step loop.

One aspect that sets this synth apart from its predecessors are the knobs for real-time access to 3 of the FM operators' frequency ratios, depth, and envelopes. Design a voice in the editor, and then the knobs can morph that voice as your sequences play. And to make it extra-tweakable, set up two scenes for your patch; each scene has its own FM tweak settings, filter settings, and a few more parameters. You can "fade" between these scenes with the Scene knob, adding a new layer of FM expression: find settings you like for all of the knobs (in the top section of the editor), then "sync" one of the 2 scenes to those settings (using the Sync feature in the editor). Repeat for the other scene. Now you have 2 different scenes to fade between, over the rhythm. 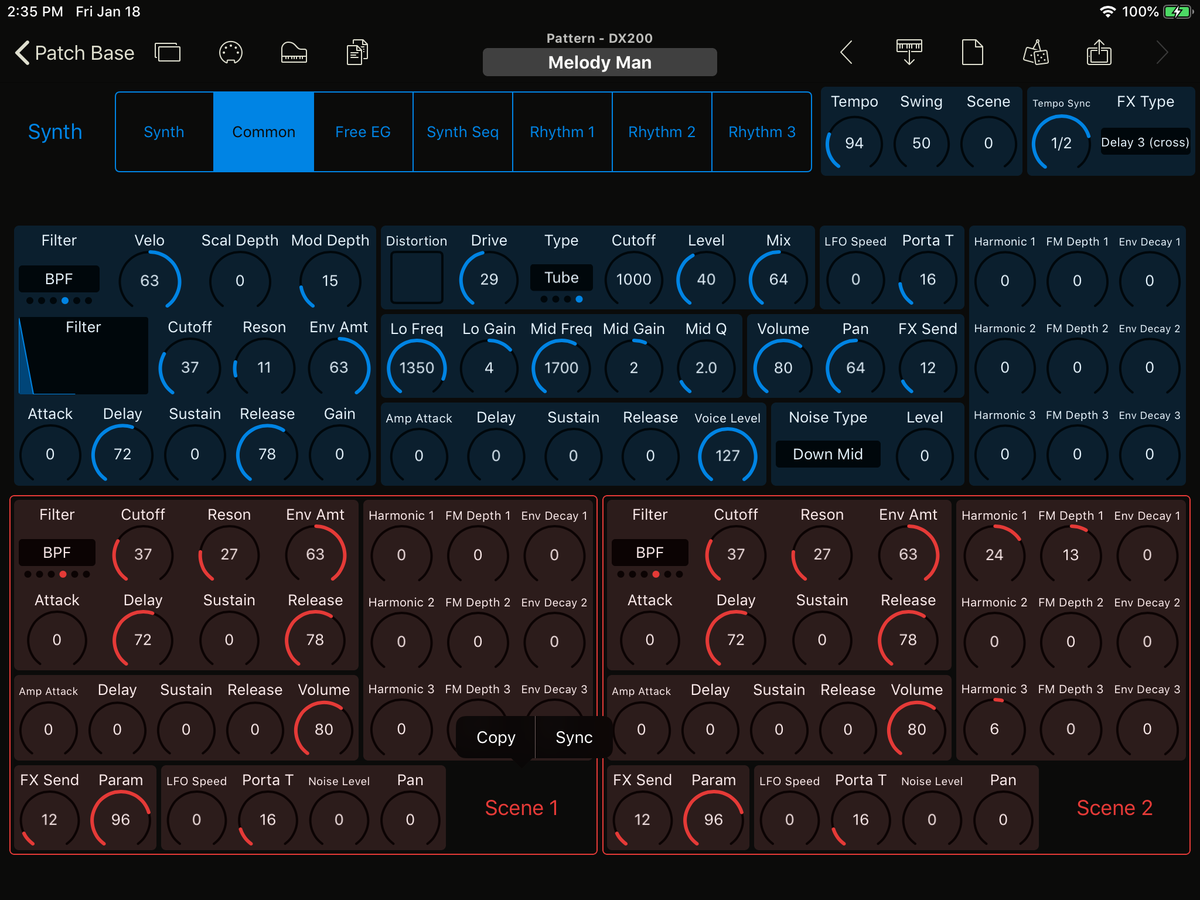 The Free EG ("Envelope Generator") section is where you can get really deep into your pattern's sound. The DX200 can record a sequence of the knob tweaks you perform, on up to 4 different knobs controlling the synth. Each one of these 4 recorded motion tracks is called a Free Envelope, and Patch Base lets you hand-edit each of these with multiple tools: draw with your finger, draw lines, smooth a section, randomize a section, scale the envelope, and shift the envelope data left/right, or up/down. Each Free Envelope is 192 data points, and you can zoom in if you need to edit a small section with greater detail. 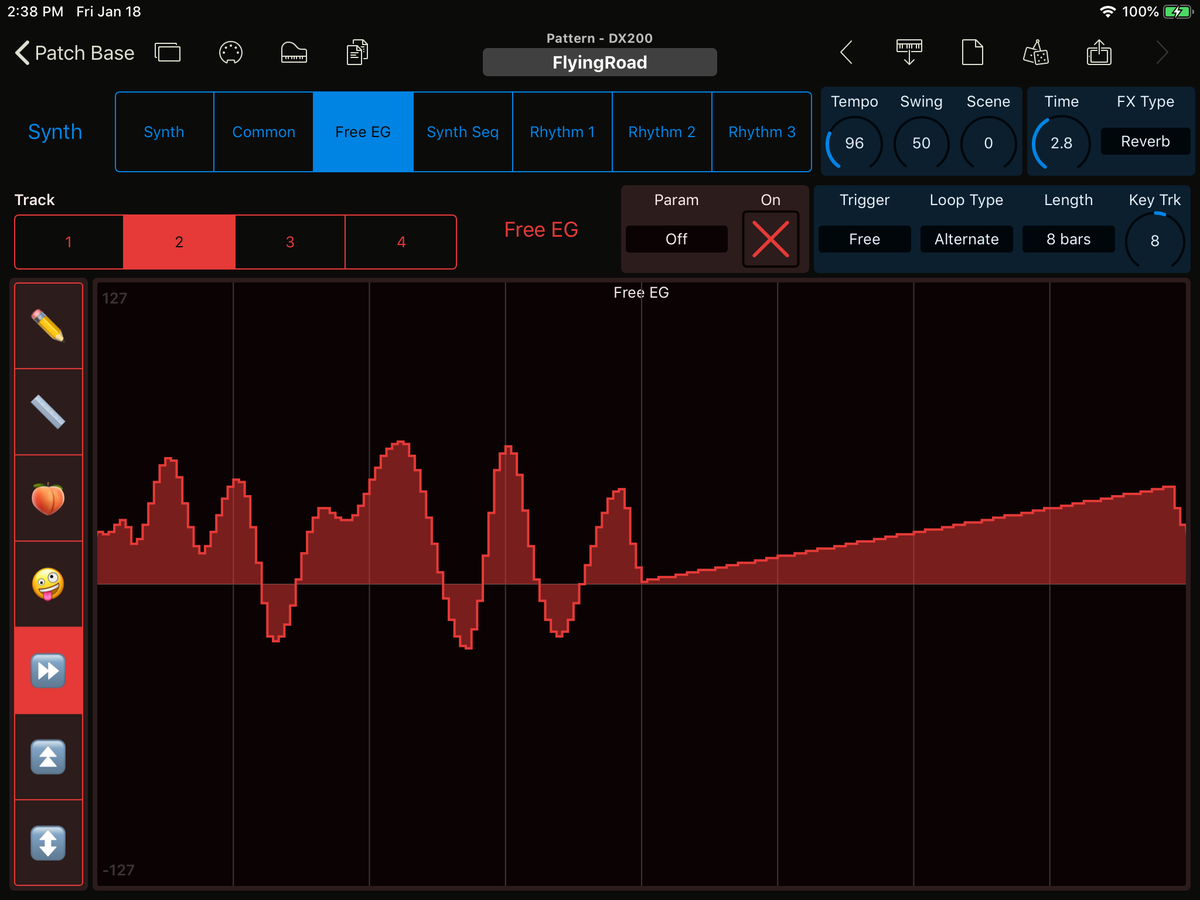 The synth sequencer gives you 16 steps to play with, each with its own note, velocity, gate length, and mute. So you can create a sequence with lots of steps, and mute/unmute the steps as the sequence plays to get variation. The notes can overlap, since the FM synth is polyphonic. The bottom row of the editor has checkboxes to group-edit multiple steps at once. Just check all of the steps you want to edit, then change the parameters on one of them, and the others will update in sync.

There's also a "Control" parameter for each step that I included controls for, but frankly, I can't figure out what they do! They're documented in the MIDI section of the manual, but in name only. I thought maybe related to the sequencer sending out CC messages, or the DX7's expression controls, but that doesn't seem to be the case. Anyway, they're there, if you know what to do with them. 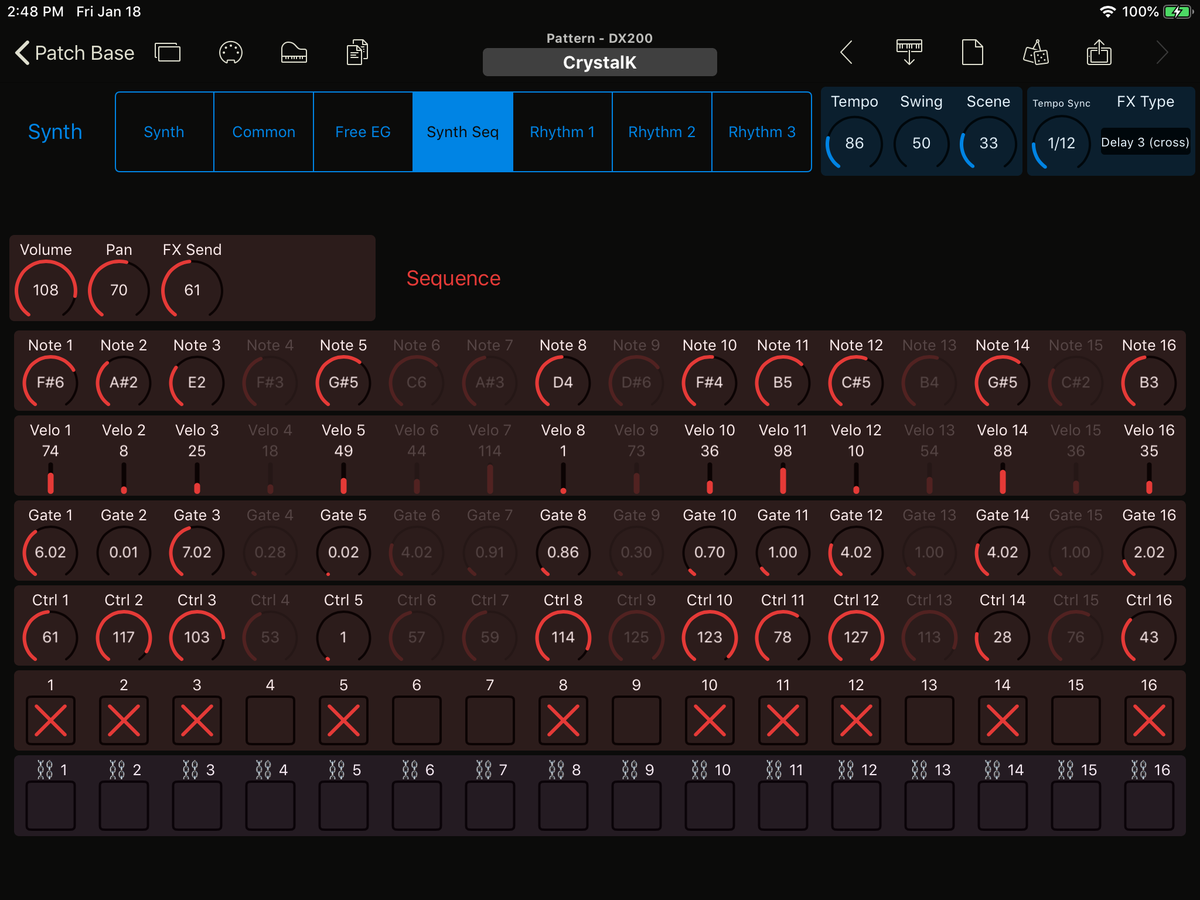 And then, there are the drums. Not so exciting, but not bad. In addition to a sequencer for the synth voice, you also get 3 sequenced rhythm tracks. Each track can play one sound at a time, but every step can have a different sound on it (with a different velocity, pitch, and note length). There are over 70 samples to choose from, so you have your choice of several kicks, snares, hats, claps, and effect sounds. You can pitch-shift the samples, control the gate time, and the loudness, but that's it. You can also filter the entire track (there's a separate low-pass filter for each rhythm track).

A quick aside: one of the kick sounds on the DX200 is clearly the exact kick sound from Aphex Twin's "Isoprophlex", a track he released 10 years before the DX200 came out. What is the story here? Is this kick on some other piece of gear? Did Yamaha commission him for samples on the DX200? But I digress.

So yeah, 3 rhythm tracks. And while it's probably faster and more freestyle to first punch in a rhythm on the DX200 itself, the sequence editor in Patch Base is great for fine-tuning your rhythm patterns. I included a row of "link" checkboxes in the editor, so that you can make changes to multiple steps at once, which is great for trying out say a different kick sound on every step that a kick, or changing the pitch of multiple steps at once, etc. 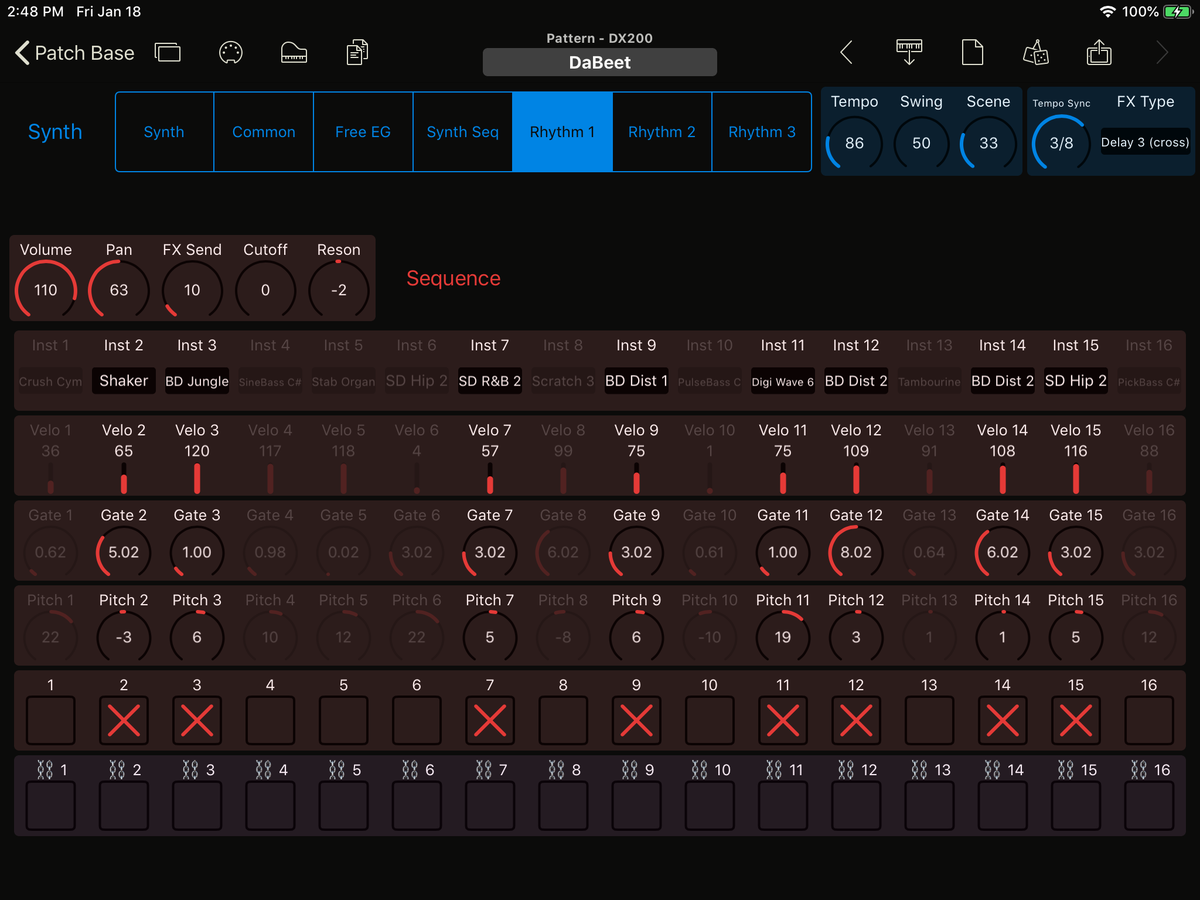 You can save 128 patterns on the DX200. Each pattern has its own DX7 voice, sequences, effects, etc. Everything I've covered above is included in a single pattern. With the bank editor in Patch Base, you can back up all 128 patterns to a file, and you can also rearrange patterns and save new ones as well. 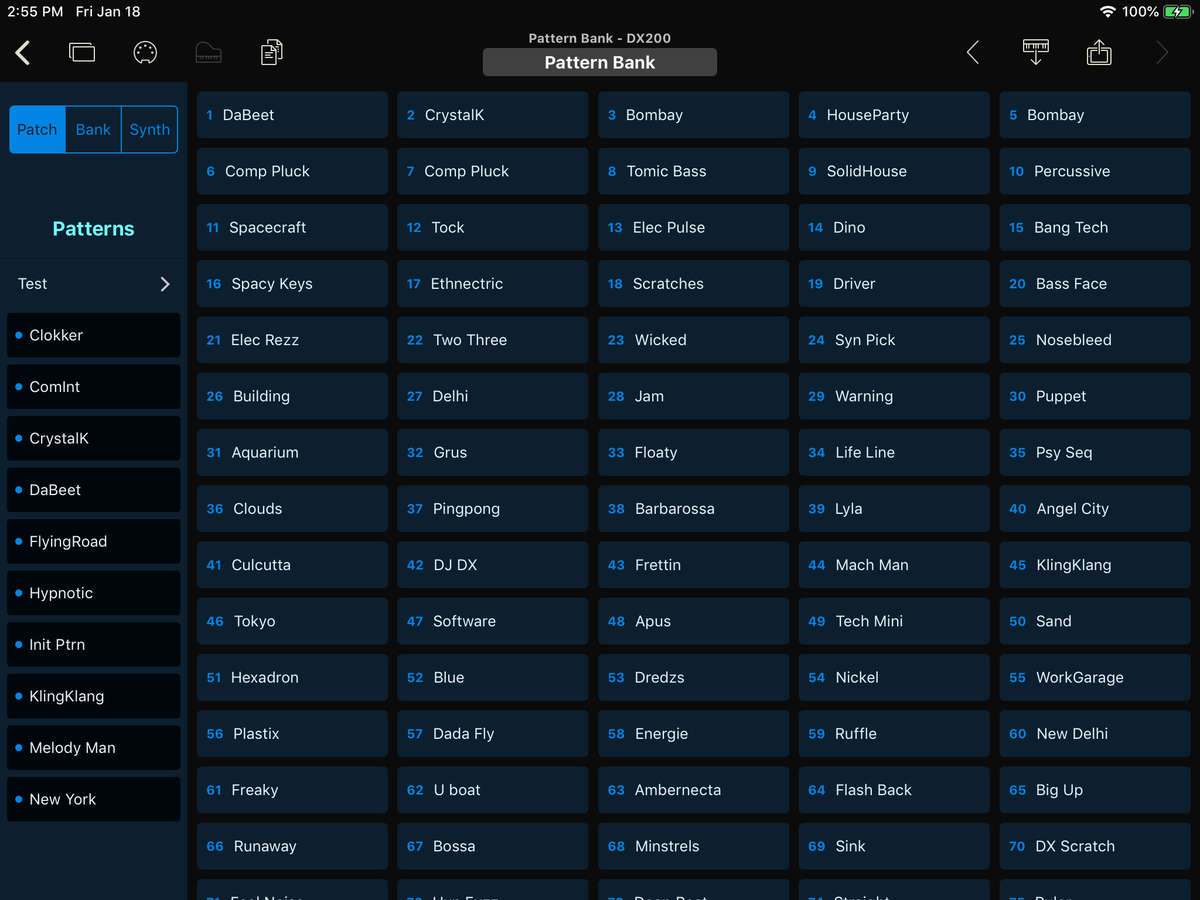 So, that's the gist of this new editor. It gives you the power and organization to use your DX200 as a DX7, a loop production machine (try the patch randomizer to get some really strange loops and sounds), or a live performance box. Hope you enjoy.