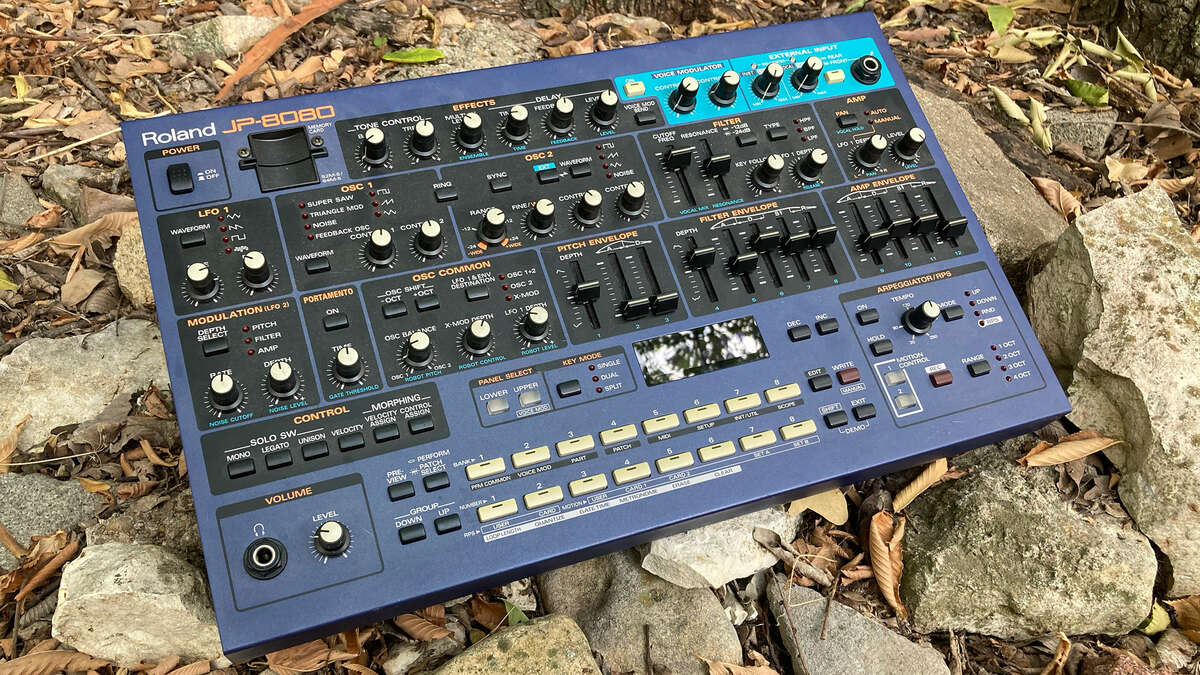 The latest updates to Patch Base (iPad version 3.25 and Mac version 1.19) add an editor/librarian for the Roland JP-8080: a dual-timbral virtual analog desktop synth from the late 90's.

The JP-8080 can play 2 patches at the same time, each with its own 2 oscillators, multi-mode filter, envelopes for pitch, filter, and amp, 2 LFOs and effects. Also included is the Voice Modulator section which can turn the synth into a vocoder, or a filter bank processor for the patches or an external input. Each patch can have almost any of its parameters modulated by note velocity as well as external CC control (one CC control can map to all of the parameters). It also sports Motion Control, which can record parameter modulation over multiple bars, as well as a note pattern recorder. So, this synth is very much about modulation and loop creation.

All the sound parameters on the JP-8080 are wrapped up inside a single Performance. The Performance holds 2 patches: Upper and Lower. These patch editors are shown in first 2 tabs of the Performance editor. All the parameters for a single Patch are shown on one screen, along with the MIDI channel and related performance settings for that patch. 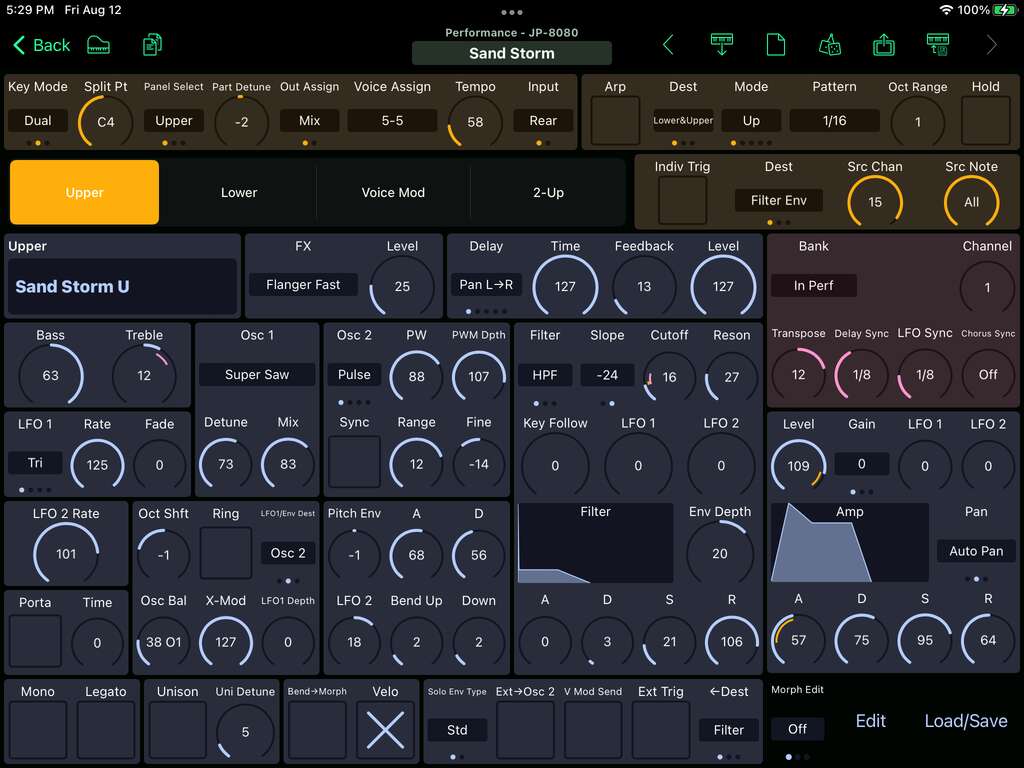 (If you recognize the name of that patch, yes, it was used in the track by the same name).

Each Patch can be named separately, and the “Load/Save” button opens a patch browser to load or save individual Patches from a Performance.

The “Morph Edit” switch in the lower-right toggles into Velocity or Control mode, where you can edit how much the different parameters respond to velocity or external control changes. In the patch above you can see that the “Level” and “A (Attack)” and Filter “Cutoff” parameters are responsive to velocity. The Velocity and Control edit modes are color coded to help make sense of things. Below is the same patch in Velocity edit mode. In this mode, changing any of the knobs will now alter the velocity sensitivity of that parameter: 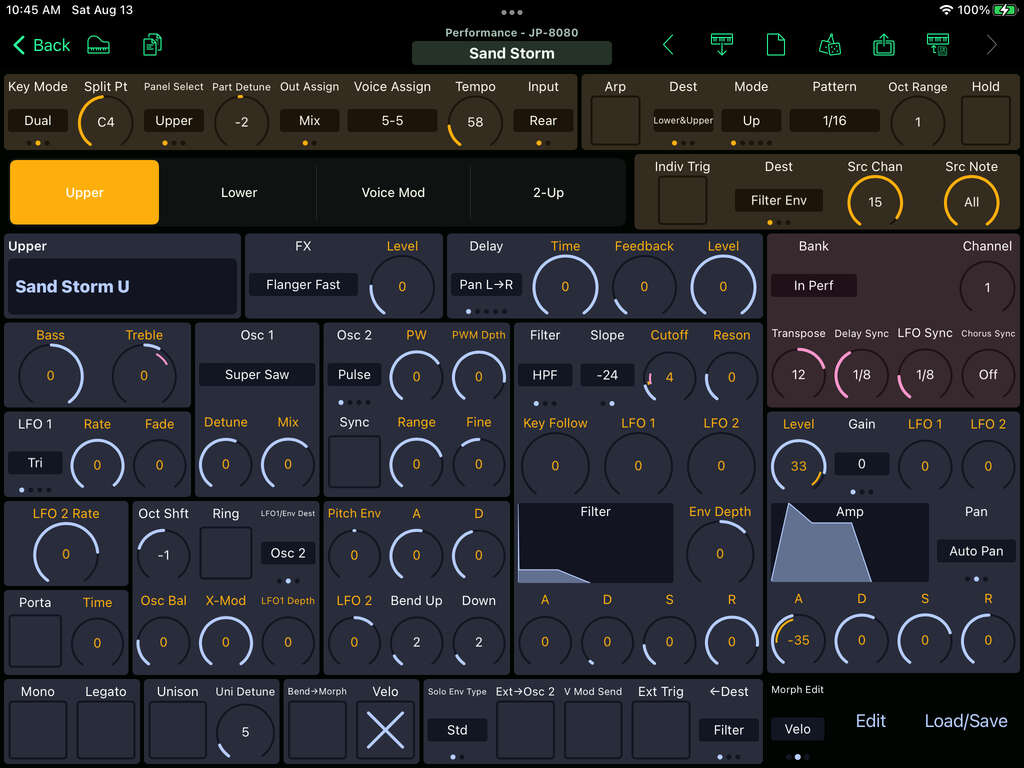 The Voice Mod tab lays out all the settings for the Voice Mod section of the synth. The Algo control sets whether the Voice Mod is acting as a vocoder or a filter bank. The rest of the controls handle routing of external input, and the parameters of the different aspects of the voice modulators. Char 1–12 let you tweak the amplitudes of each of the 12 frequency bands in the virtual filter bank. 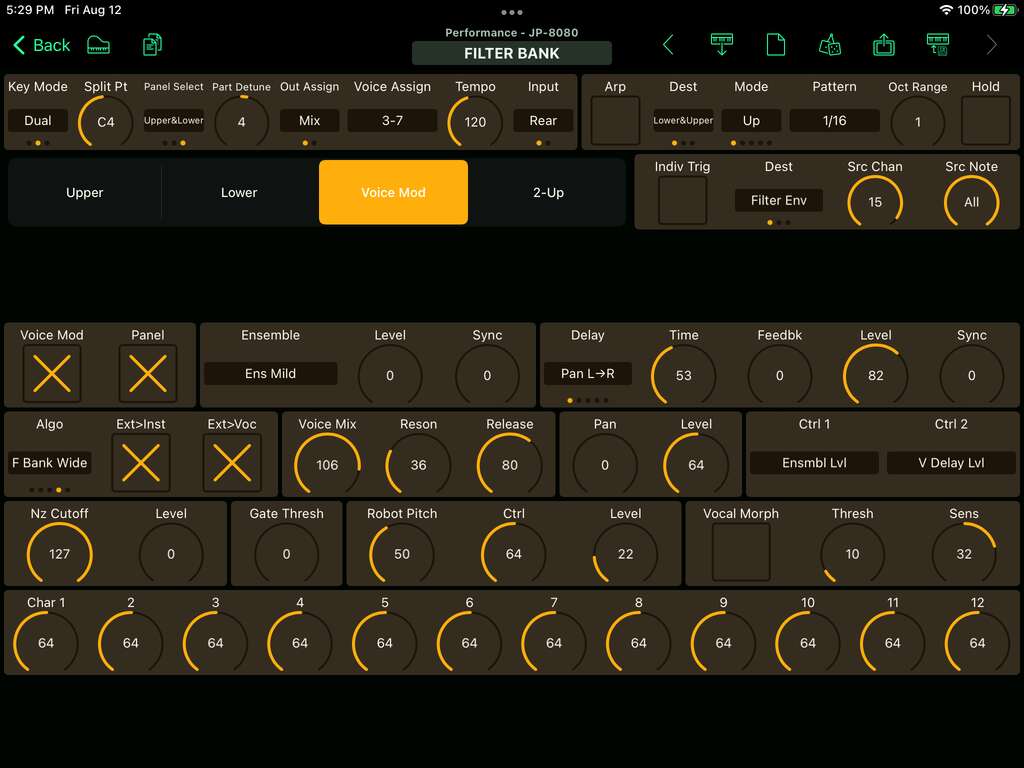 The 2-Up tab shows both the Upper and Lower patches on a single screen. Since not all of the controls will fit nicely, this panel shows the controls that you're most likely going to care about when your two patches are being played together (mainly the oscillator, filter, and amp sections). Morph edit is available here as well, giving you an editing view that isn't possible on the hardware itself. 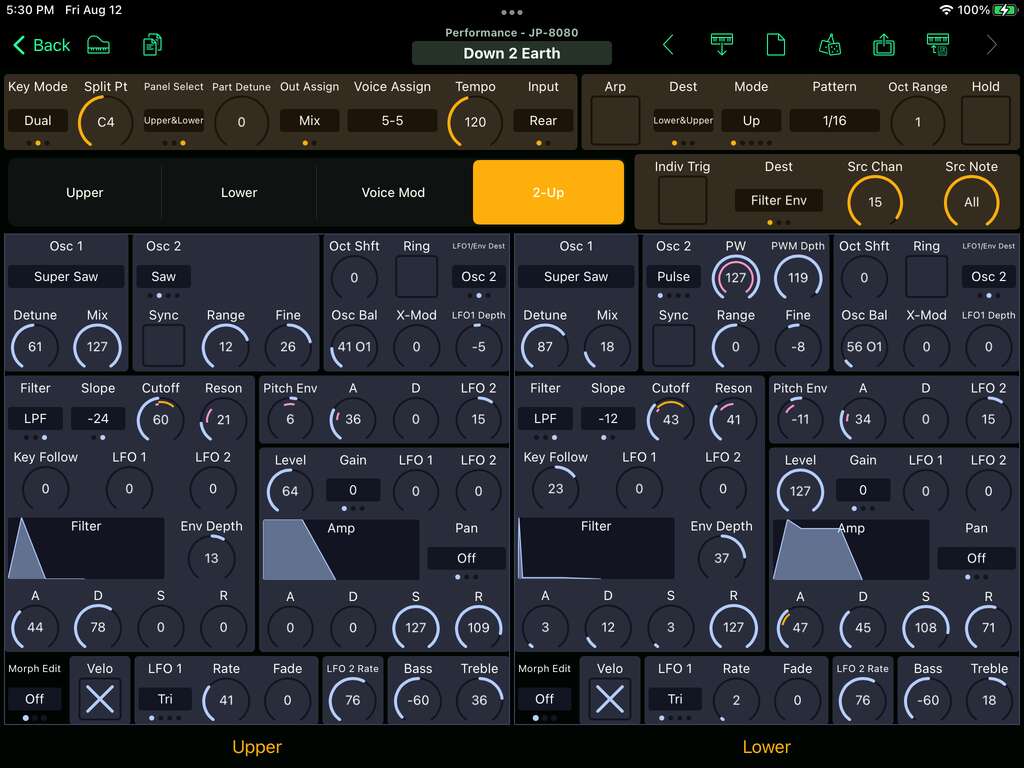 As usual, this editor includes bank editors for the synth, here the Performance and Patch (internal) Banks. You can fetch all of the internal patches and performances, save them to files, and load bank files you already have.

A Backup editor is also included, which is a newer addition to Patch Base. This screen gives you a single place where you can press “Fetch” once to get the Global (system) settings, and the Performance and Patch Banks all downloaded in one go. And you can save all of them to a single file to keep them together. Please note though that Motion and Pattern data aren't included in these backup files, due to technical reasons with fetching them.

These Backup editors are slowly being added to all of Patch Base's existing editors as well, so be on the lookout for updates that include those.