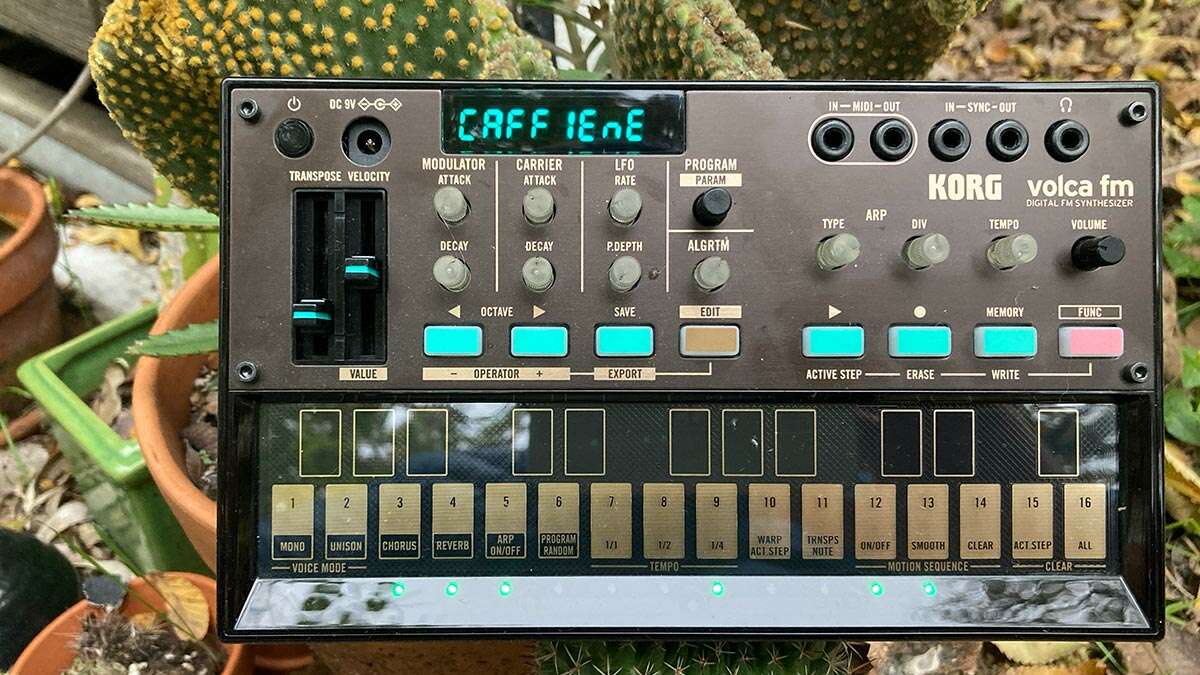 The latest Patch Base releases (iPad version 3.26 and Mac version 1.20) include an editor/librarian for Korg's (fairly) new Volca FM2, the new version of the highly popular Volca FM, which as you might know is a sort of clone of the original Yamaha DX7.

And there's not too much new about the Volca FM2; it's the same voice architecture as the original, but you now get six voices (like the DX7) instead of three. There's also a built-in reverb now, and a MIDI Out port.

From the MIDI perspective though, there is a big difference with the new Volca FM2! Korg really fleshed out the MIDI implementation on this new synth, allowing for fetching of Voice patches and Sequence patches (including the internal memory banks). And that means that this new Volca FM2 editor in Patch Base gives you full access to detailed editing of internal sequences! Something that, as of this writing, I don't think you can get anywhere else. More on that shortly. 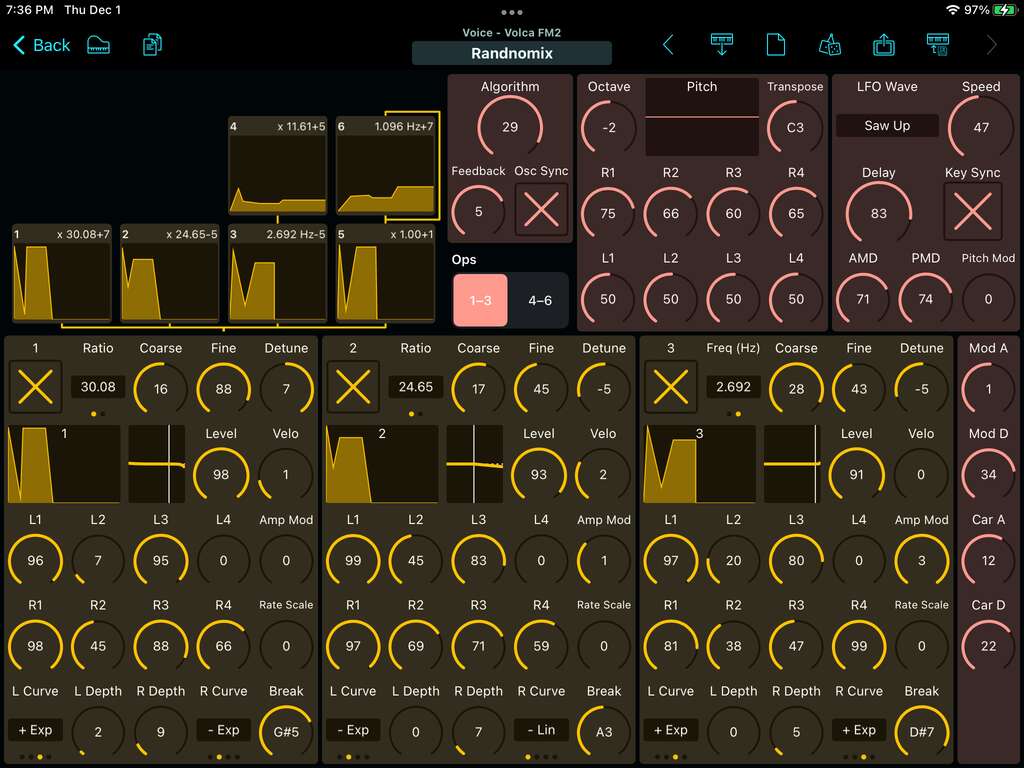 The Patch Editor here is very similar to the original Volca FM: you get the overall patch visualization in the top-left, showing how the FM ops are connected to each other, and the envelopes and ratios/frequencies of each of them. In my biased opinion, it's one of the clearest ways to intuit what's going on with an FM patch.

Then you have a view of 3 ops at a time for editing, plus the overall patch parameters like the Pitch Envelope, LFO, etc. What's new here are the controls for Modulator and Carrier Attack/Decay on the right; the Volca FM2 (and Patch Base) saves these parameters with your patch, and they're very nice ways of creating larger scale sound changes with a single control. 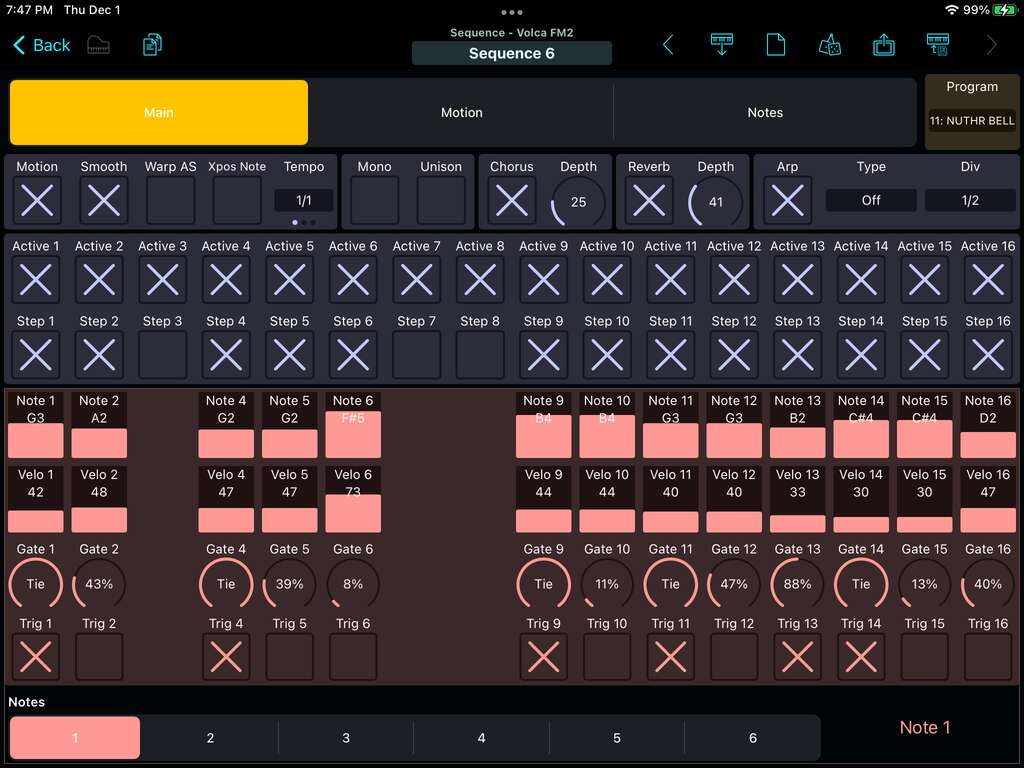 The Sequence Editor on the other hand is totally new to the FM2. In it, you have the ability to edit a 16-step sequence, with up to 6 notes per step. This first page shows you the 16 steps as well as the overall parameters to turn on/off the Arpeggiator, effects, Mono/Unison, etc. The bottom tabs control which of the 6 notes per step you're editing. 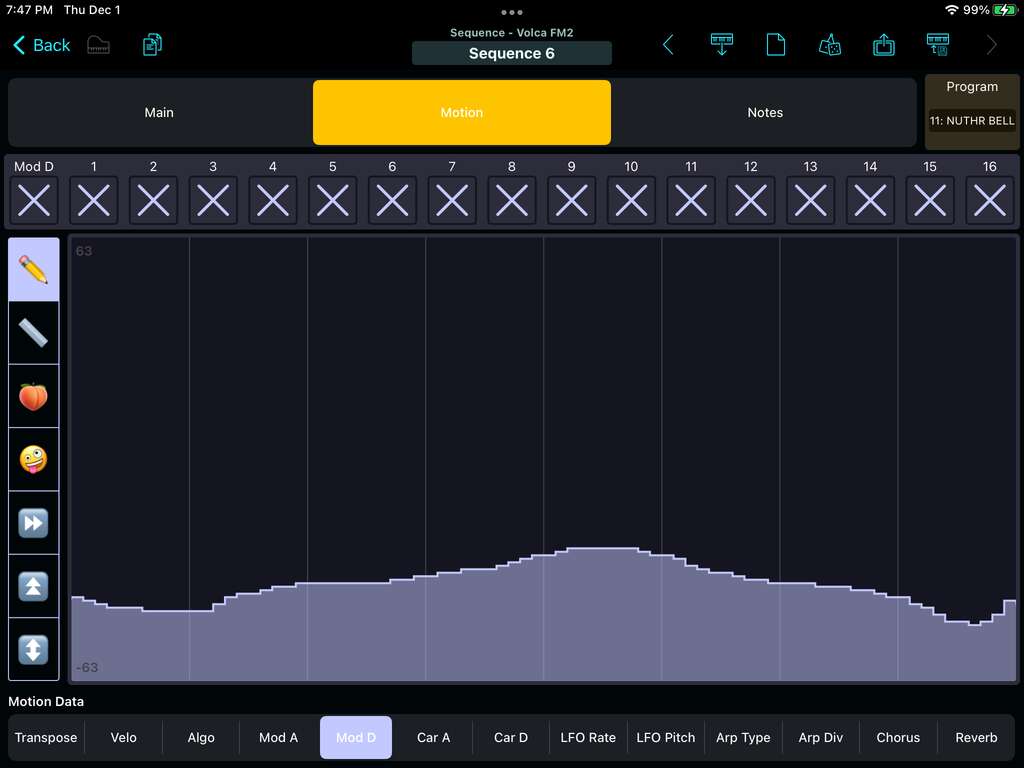 The Motion tab lets you edit parameter automation, essentially. The different parameters that can be controlled are listed in the bottom tabs. The left tabs switch between which tools you can use: freehand drawing, line segments, smoothing, randomization, shifting, and scaling. The top checkboxes let you turn on/off automation for a given step in the sequence. 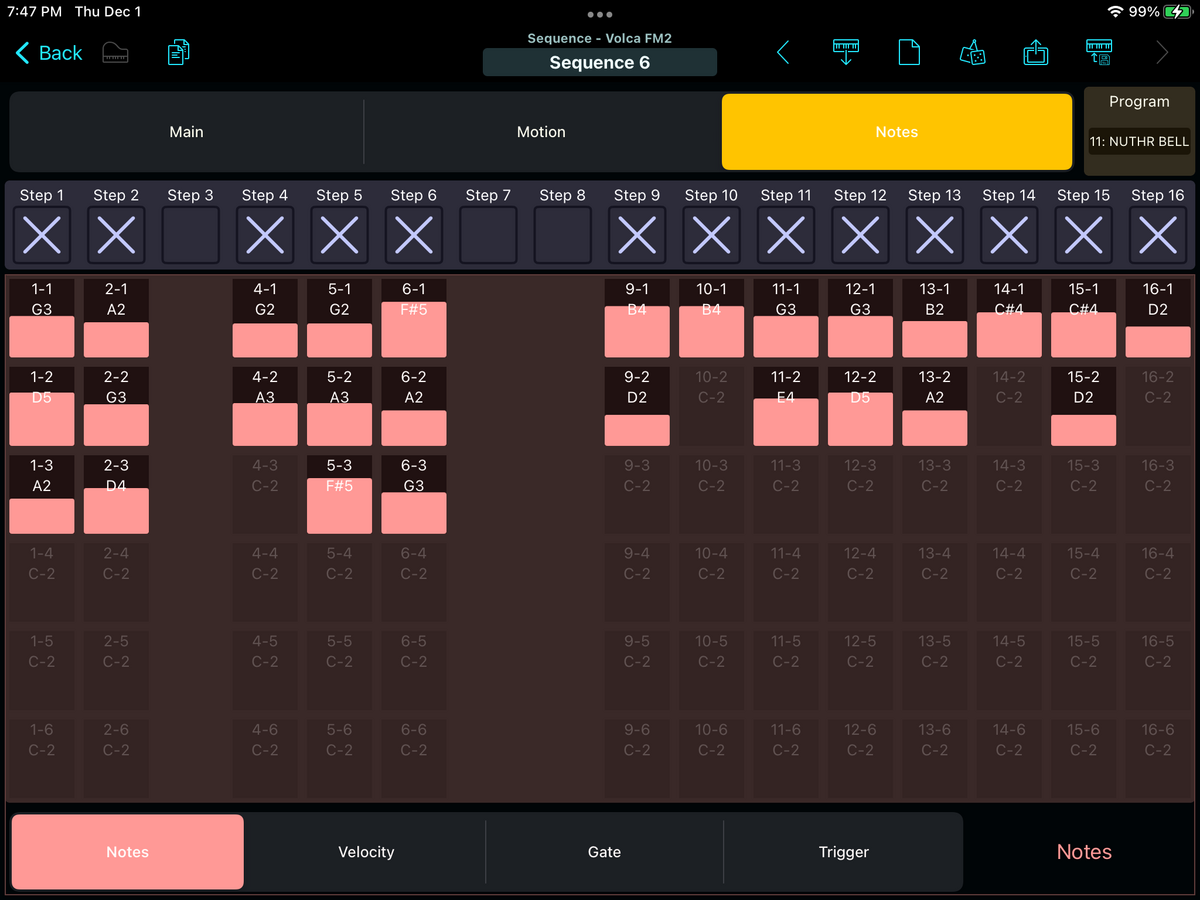 The Notes tab gives you an alternate view of the Note data in the sequence; letting you seeing a given parameter across all 6 notes at once for each step, so you can create chords more easily, alter lengths, etc. There are controls given to also initialize a parameter, or randomize it.

And as usual, you can also Randomize the entire Sequence! This yields some really interesting results for people looking to generate lots of different sound material for sample/chopping or just exploring sound design quickly. A single voice patch can sound like a lot of different things when you get busy with the Motion control.

The Volca FM2 editor includes Bank Editors for the 64-patch Voice Bank and the 16-patch Sequence Bank. You can now back up your Volca FM(2)!

Also include is the newer Backup editor, which lets you fetch the Voice and Sequence Banks in one fell swoop, and save it all to a single file.

Sequences on the Volca control one of the internal (saved) patches. But often you may want to be working on a Voice patch at the same time as a Sequence patch. So, the Full Sequence editor gives you a way to save a Sequence and its associated Voice patch to a single file. So, you can load that file and have a sequence with a custom sound that isn't saved to the Volca's memory. It's also a good format for sharing sequence/sound combos with others.