The Full Performance Window is a place to load and save “full performances”. A Full Performance is a file that stores both the data of a Performance (levels, effect settings, and pointers to which sounds are used, etc.) and also the actual data of the patches used within the Performances. Note: this feature is currently only available to a few Patch Base editors, but will be added to the rest in the coming updates!

Previously, Patch Base only allowed you to save a Performance by itself, without the accompanying custom patch data (if any) that was used by the Performance. As a result, if your synth didn't have the needed voices that the Performance uses already loaded, many Performances wouldn't sound right. Now, the Full Performance editor enables you to save the currently loaded Performance and any needed patches in one file for later use. 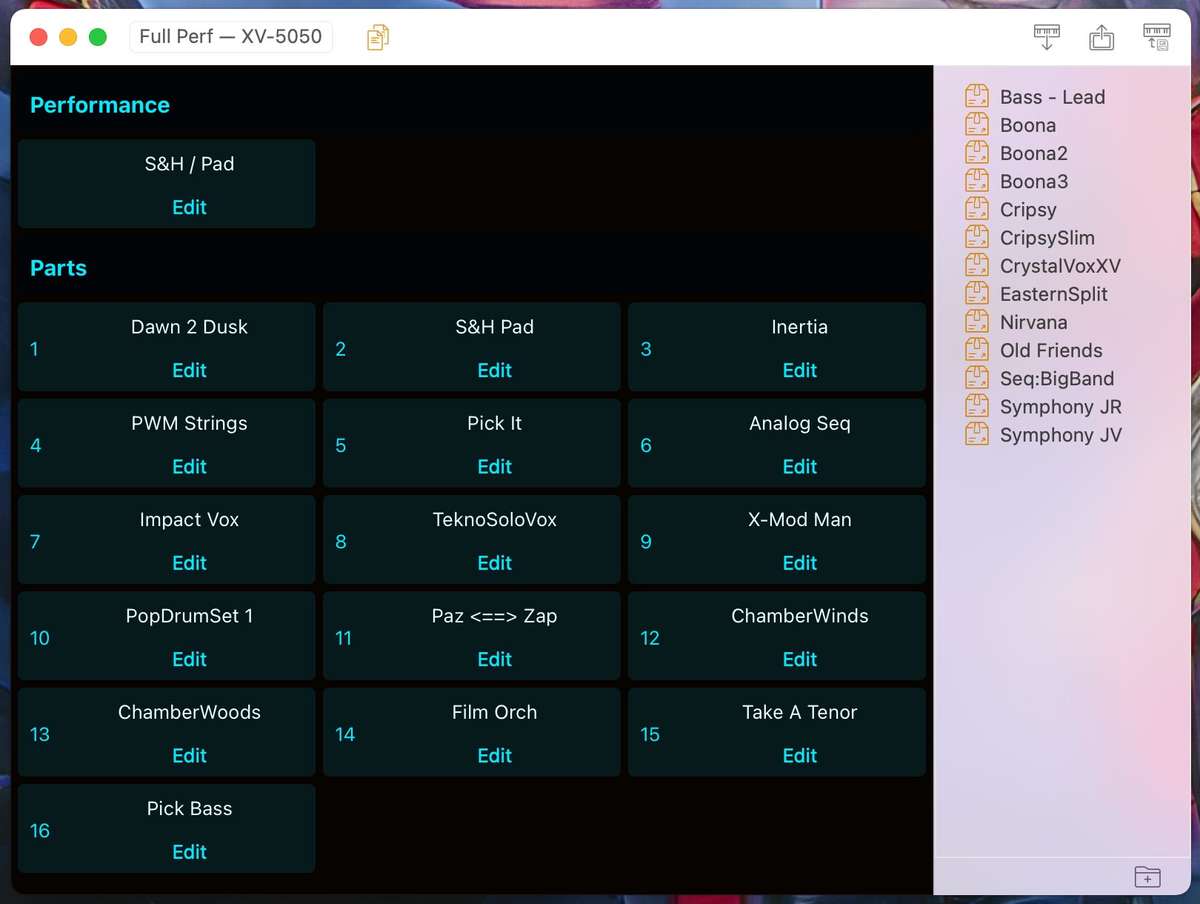 The window shows you the name of the Performance at the top, and then the name of each of the voices used in the “Parts” section below it. Clicking the “Edit” button on any of the cells will open up the editor for that part (or performance). To save the Performance and all the associated patches to a single file, just use the File > Save menu and you'll get the typical save dialog where you can name the Performance (it will default to the current name).

Many Performances only use a few patches (with the rest turned off), or perhaps they use several presets that are permanently stored on the synth. In these situations, there's no need to store those presets with the Full Performance file. You can simply click on the cells of any voices that you don't need to save to the file, and when you save the file, those voices will be left out of the file. Below is a picture with 8 of the 16 voices marked not to save to the file. You'll note that these cells are dimmed, but also the preset location and preset name are shown on the cells, to indicate that when this performance file is loaded, those parts will simply point to the existing preset on the synth, rather than have a custom patch loaded for those parts. 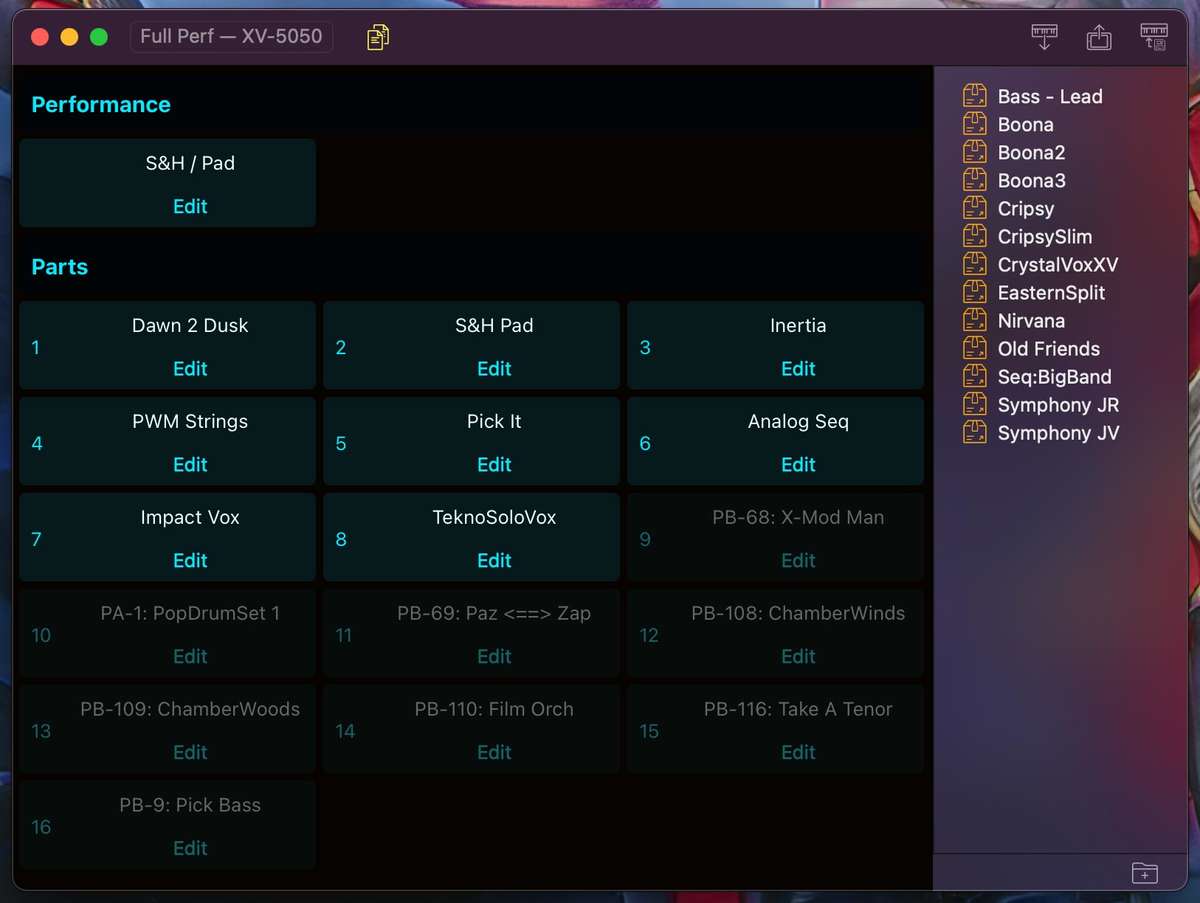 The right-most button in the top of the window is the “Save to Synth” button. This button brings up a dialog allowing you to specify where you want to save the Performance to in memory, as well as where you want to save each patch to in memory! This makes it easy to make sure that all the data for a Performance is saved onto the synth, for later recall. Any cells that are dimmed when this button is clicked will not be marked to save to the synth. And further, you can specify in the dialog that you don't want to save some of the patches, if you wish. 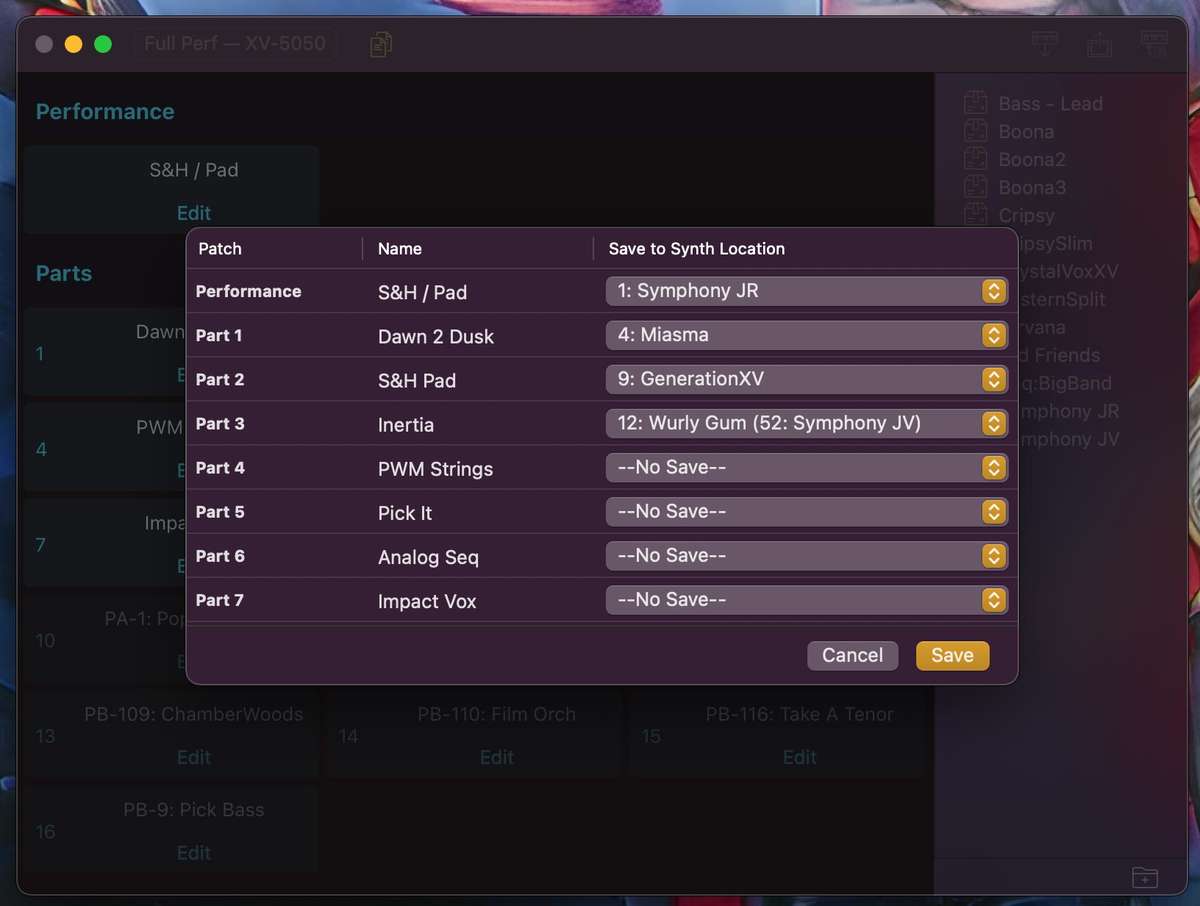 When you click “Save” Patch Base will send the appropriate messages to the synth to save to all of the selected locations in the window.