Patch Base can import sysex files that contain saved patches that you may have downloaded online, or saved from another program, as long as they are sysex files in the synth's native format (i.e. not a file format specific to some other 3rd party editor). There are a couple of ways to import files.

Drag and Drop in the File Browser

Probably the simplest way to import patches or banks is via the right-hand file browser in any of the Patch Base windows. Just drag the file into the appropriate window, and your file will be moved (not copied!) to the appropriate folder to be accessed by Patch Base. 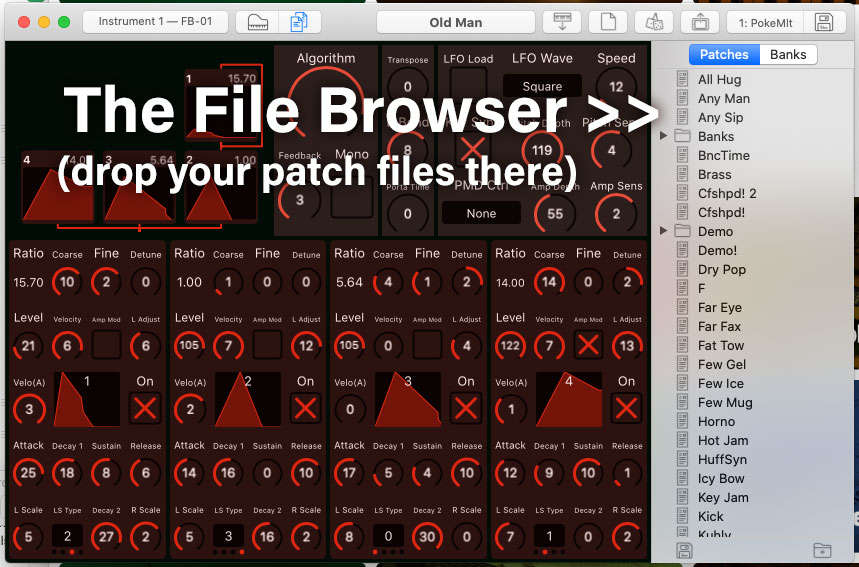 By "appropriate window" I mean that if your file is, say, a single DX7 patch file, then you would drag it onto the browser in the DX7 Patch Editor window. But if you have a DX7 bank file, you need to drag that file into the browser of the Bank Editor window! Patch Base doesn't automatically figure out your file type for you.

Import with the Finder

The other way to import files is to just put them in the right folder on your drive, and they'll appear in Patch Base.

Inside your Patch Base folder you'll have a "Modules" folder, and inside of that folder, you should see a folder for every synth you've added to Patch Base. Within the synth's folder, there will be a folder for each type of sysex file that the synth uses.

For example, here's the folder structure for the Roland JV-1080:

Please note, the folder for a sysex file type won't be created until at least one file of that type has been saved in the app. So if you don't see the folder you want, just save an init file from the app, and it should appear.

The "Temp" folder holds temporary patch/bank files that store the editor's most recent state. The folder is not directly accessible when using the app, and should be left alone.

When you see the little question mark (?) next to a file in the browser in Patch Base, that means that Patch Base doesn't think that the file is the right format. Here are some common reasons: