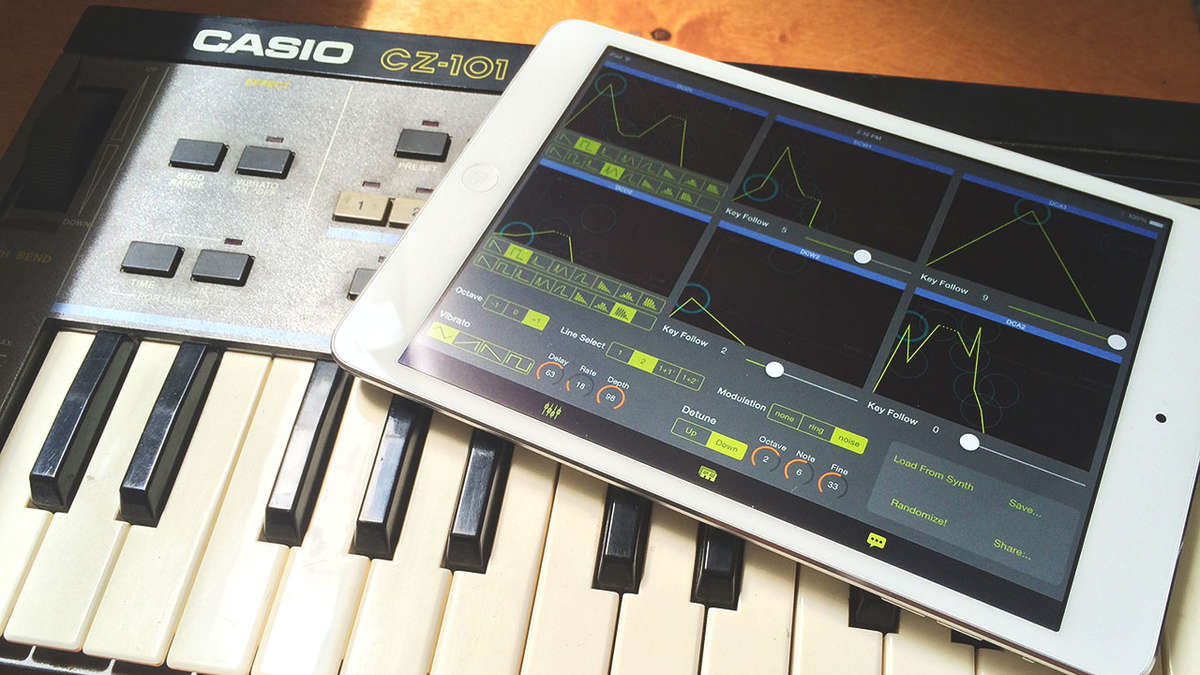 Sound Design with the Casio CZ

Today I'm happy to announce the release of my first set of custom patches for the Casio CZ synthesizer family: CZ Pack 1. The pack contains 20 sysex files that you can use with your CZ-101, CZ-1000, CZ-3000, or CZ-5000. You can give a listen to some examples of these sounds in the video below. And beyond that, I thought I'd share some insight into my sound design process with the CZ.

This set of sounds was designed using my iOS CZ editor app, CZ Touch, and my trusty CZ-101. I wanted these sounds to be, well, kind of weird, but musical. Each sound started by using the "Random Patch" feature of CZ Touch, to start me out at some unknown location in the landscape of CZ sound possibilities. You never know where you'll be after you hit that Random button.

Of course, the majority of sounds you get when starting with a random patch are not immediately usable in a musical context. A random patch is like the raw material for the sound. You start out with this weird, gurgling/howling/whooping/static-y beast, and then you try to tame it into something that someone might use in a piece of music! How do you tame it? Here are some strategies. My disclaimer here is that I'm assuming you understand a lot of the basics of oscillators and envelopes and the like. But if you have any questions, leave them in the comments! I'm happy to try to explain. Ok, here we go.

The DCO envelopes control the pitch of the sound. When you're trying to make a musical sound, you're pretty constrained with how crazy you can get with these envelopes. You usually want a continuous pitch if you're going to use a sound in a musical context. So, you either want a sustain point in your envelope (to hold the tone), or a long segment between two points that have similar level values.

With a random patch, you're probably going to start out with envelopes that are way too crazy. So, try reducing the number of points in the envelope to maybe just 2 or 3, with a sustain point in the middle. Or, have a long envelope with a sustain point near the beginning, and you'll get a sound that starts to tonally wander after you release a note. That, mixed with a good volume (DCA) envelope, to make it a quiet wandering, can be a good effect.

If you have both DCO1 and DCO2 going (i.e. a Line Select setting of 1 + 2'), then you're even more constrained with these envelopes, since you probably want the tones of the two oscillators to be the same, or octaves apart, or at least nicely related (say, a perfect 5th or something). If you're having a hard time telling which oscillator is doing what, use the Line Select button to switch between each of the oscillators.

These envelopes are the other main culprit when you're faced with a wily random patch. If you're getting no sound, or a really short sound, or a sound that takes 30 seconds to fade in, look here. The first point in your DCA envelopes probably shouldn't have a rate of lower than 30 or so, otherwise your sound is going to take a long time to show up when you hit a key!

On the flipside, if your sound keeps going forever after you release a key, then you need to tighten up the end of your DCA envelopes! Look for any points with really low rate values that occur after your sustain point, and bump those up some. If you don't have a sustain point in your envelope, then the whole envelope is going to get played for every note, and the note length will be dictated by the DCA envelope (and not by how long you hold down the key). This can be cool! But keep it in mind.

If your random patch sounds like a dub siren, a UFO landing, or a robotic whooping crane, and that's not what you're looking for, then check the vibrato! Chances are that the depth setting is jacked up too high. For an actual vibrato to your tone, you probably want a pretty low depth setting, and a moderate to high speed setting.

Another effect you can get with the vibrato is kind of like an arpeggiator (a 2-note arpeggiator, that is). If you set the vibrato wave to a square wave, your sound will play 2 notes back and forth. The second note in that sequence is set by your vibrato depth setting, so use that to "tune" your second note to something like an octave, or a third... whatever you want. You can also use the vibrato delay so that shorter notes just play one note, whereas longer notes will have the vibrato kick in. I used this technique on the "Fade Pad" sound.

No Such Thing as a Short Sound Design Post

Ok, so even with a relatively-simple synthesizer like the CZ-101, there is a ton you could write about how to design sounds on it! For today I just wanted to cover the basics of taming the random patch. If you want to hear more though, let me know! Leave a comment, or say hello on Twitter.